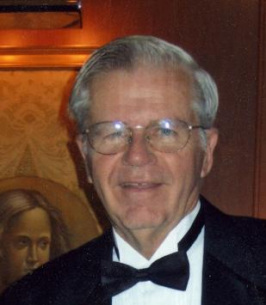 
Francis Patrick McIntyre (Frank) passed away July 29, 2022 at age 89. He was born in Port Chester, New York on April 28, 1933, to Patrick and Margaret (McGoldrick) McIntyre. He was raised in Harrison, New York.

Frank graduated from the First graduating class of Stepinac High School in 1951. He received a BS degree in Electrical Engineering from Manhattan College and a master’s degree in electrical engineering from Columbia University.

Frank worked for Riverside Research Group based in New York City. He continued his work and later resided at their Tewksbury, Massachusetts location. He worked for 51 years at Riverside Research Group and was awarded the President award for recognition as a mentor to his fellow workers and for his dedication. He was a quite warrior who rendered his services as a “behind the scenes” expert in sonar and radar areas on various worldwide defense projects and naval ships. Frank had achieved a great deal in his lifetime and provided the U.S.A. tireless due diligence in his field of expertise. Upon retirement he resided back to his childhood home in Harrison, NY.

He was very humble and had a great sense of humor. He was a very giving soul. He will be missed by his many cousins, friends, and staff at King Street Rehab.

He sincerely wishes all the professionals and staff at King Street Rehab for making his final years so fulfilling and happy.

In Lieu of flowers please donate to The Francis P. McIntyre Engineering Scholarship c/o Stepinac High School or The NY Special Olympics as both were favorites of Francis.