To share your memory on the wall of John Sposato, sign in using one of the following options:

Print
John Sposato, of Harrison, passed away peacefully on April 1, 2021 at the age of 90. A lifelong resident, John was born in his family’s home in the Brentwood to his parents Frank and Grace on January 14, 1931.

John was a loving husban... Read More
John Sposato, of Harrison, passed away peacefully on April 1, 2021 at the age of 90. A lifelong resident, John was born in his family’s home in the Brentwood to his parents Frank and Grace on January 14, 1931.

John was a loving husband, father and grandfather. He lost his wife and the love of his life, Mary Ann, on September 6, 2000. Together they raised six children. His eldest child and daughter, Donna Marie, predeceased him and he is survived by his remaining five children, John (Nancy), Angela, Frank, Leonard (Enza) and Peter (Monica) as well as his six grandchildren, John Anthony, Brianne, Peter, Marianna, Isabella and Juliette.

John was a prominent fixture in the Harrison community. In the 60’s he and his brothers owned the iconic Surrey’s Restaurant that made the best egg cream sodas ever! He was a founding member of the “Lucky 13 Club”, a member of the Knights of Columbus and the VA. Eventually John went to work for the Harrison Central School District as a custodian in the Harrison Avenue School. While there, he had a positive influence on many of the children and enjoyed much appreciation from the parents for his caring gentle and nurturing nature.

John’s open heart and tremendous empathy went hand in hand with his devotion to his faith and his country. He was raised Catholic, attending church services daily, bright and early at 7 am, he was a Eucharistic Minister for a number of years helping with church services and offering communion. John’s devotion included his tremendous pride at having served his country. As a Korean War Veteran serving as an aircraft groundsman on the USS Wasp, John would often reflect on his time in the US Navy, as some of the proudest moments of his life.

Anyone who knew John would say he was one of the nicest people you ever met. He loved to tell jokes, play golf and spend time with his family. His memory resonates with so many because of his kindness, big heart and generosity.

This is John Sposato. He lived, he loved and he left us with wonderful memories.

In lieu of flowers, John’s wishes were to honor his wife and daughter with a donation to The National Ovarian Cancer Coalition (www.ovarian.org).
Read Less

Receive notifications about information and event scheduling for John

Donations are being accepted for: NATIONAL OVARIAN CANCER COALITION INC.

Consider providing a gift of comfort for the family of John Sposato by sending flowers.

We encourage you to share your most beloved memories of John here, so that the family and other loved ones can always see it. You can upload cherished photographs, or share your favorite stories, and can even comment on those shared by others.

Posted Apr 08, 2021 at 03:27pm
Angela I am so sad to hear of your dad’s passing. I know that you don’t need to be told what a wonderful man he was . He was a man of faith who is in heaven now at peace. I hope you find comfort in your memories.
Love Jeannie
Comment Share
Share via:
SB

Posted Apr 05, 2021 at 05:33pm
Dear Sposato family, Uncle John had an a kind soul and infectious smile that always lifted your spirits. He will be greatly missed. God bless. 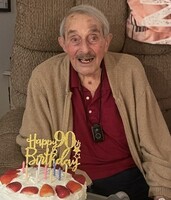